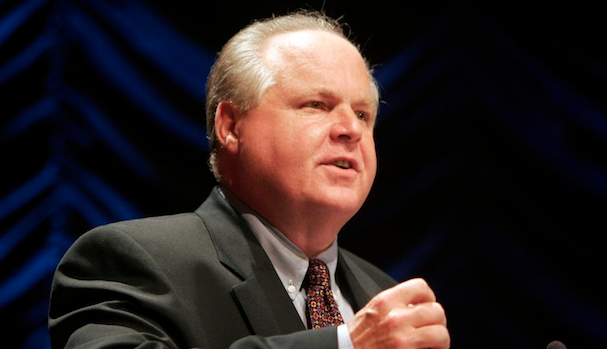 Source of Photo – The Atlantic

News has broke on the internet that Suspected, undercover white supremacist Rush Limbaugh has died at 70 years old after a battle with cancer. According to NPR the news has been confirmed by his wife.

My grandmother taught me as a child if you have nothing nice to say then don’t speak.

Keep reading to find a running file of Rush Limbaugh’s most racist quotes.

Limbaugh Says Steinbrenner Was A “Cracker Who Made African-Americans Millionaires”

Limbaugh: Obama & Oprah Are Only Successful Because They’re Black

1. “Have you ever noticed how all composite pictures of wanted criminals resemble Jesse Jackson?”

2. “Right. So you go into Darfur and you go into South Africa, you get rid of the white government there. You put sanctions on them. You stand behind Nelson Mandela — who was bankrolled by communists for a time, had the support of certain communist leaders. You go to Ethiopia. You do the same thing.”

3. “Look, let me put it to you this way: the NFL all too often looks like a game between the Bloods and the Crips without any weapons. There, I said it.”

4. “The NAACP should have riot rehearsal. They should get a liquor store and practice robberies.”

6. [To an African American female caller]: “Take that bone out of your nose and call me back.”

7.  “I think the media has been very desirous that a black quarterback do well.  They’re interested in black coaches and black quarterbacks doing well.  I think there’s a little hope invested in McNabb and he got a lot of credit for the performance of his team that he really didn’t deserve.”

8. Limbaugh’s many attacks on Obama.

Limbaugh has called Obama a ‘halfrican American’ has said that Obama was not Black but Arab because Kenya is an Arab region, even though Arabs are less than one percent of Kenya. Since mainstream America has become more accepting of African-Americans, Limbaugh has decided to play against its new racial fears, Arabs and Muslims. Despite the fact Obama graduated magna cum laude from Harvard Law school, Limbaugh has called him an ‘affirmative action candidate.’ Limbaugh even has repeatedly played a song on his radio show ‘Barack the Magic Negro’ using an antiquated Jim Crow era term for Black a man who many Americans are supporting for president. Way to go Rush.

So Rush Limbaugh has managed to make racist attacks on four of the most admired and respected people of African descent in the past one hundred years, in Martin Luther King, Nelson Mandela, Colin Powell and Barack Obama. He has claimed that Joe the Plumber, who isn’t even a plumber is more important in this election than Colin Powell, a decorated military veteran who has served honorably in three administrations. How can the Republican party stand by this man and let their candidates appear on his show? Rush Limbaugh’s comments are so racist, they’re funny, in a Borat, Archie Bunker kind of way. What is not funny is the millions of dittoheads who listen to him, who take in and re-spout all the racist rhetoric that he spits. Limbaugh’s statements are echoed in the racist, angry Palin/McCain supporters who shout ‘kill him,’ ‘terrorist,’ ‘communist,’ ‘traitor,’ ‘socialist’ and ‘off with his head.’

9. “We need segregated buses… This is Obama’s America.”